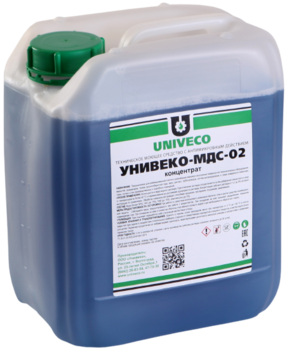 Concentrate for cleaning and disinfecting surfaces with virucidal and antimicrobial action.

Delivery
We carry out delivery throughout Russia by any transport company convenient for you.

The main active ingredients of Univeco-MDS-02 are quaternary ammonium compounds (QAC) - cationic surfactants with antifungal and antibacterial action against gram-negative and gram-positive bacteria, effective means in the fight against viruses, pathogens of ARVI and infections.

2. Didecyldimethylammonium chloride (DDAC) - a cationic surfactant, belongs to the group of quaternary ammonium compounds (QAC). It is used in combination with other bactericidal compounds and has a strong virucidal, bactericidal, fungicidal, tuberculocidal, algicidal effect, is effective against gram-negative and gram-positive bacteria (including mycobacterium tuberculosis), viruses, fungi of the genus Candida and Trichophyton, as well as excellent sporicidal and detergent properties.

The composition of the detergent and disinfectant liquid Univeco-MDS-02 includes nonionic surfactants, complexones and special additives that give high detergent properties and the ability to retain contaminants in solution, resistance to hard water and a high rate of biodegradability in waste waters.

Application:
Used as an aqueous solution. The solution is prepared by adding the concentrate to water (with a temperature not exceeding 40 ° C) and stirring until the solution is homogeneous. The concentration range of the finished solution is 0.2-5% according to the instructions for use. Surface treatment is carried out by splashing, wiping, immersion, soaking.
Recommendations for use
Precautions:
CAUTION! Observe the precautions when working with the concentrate. Use rubber gloves, glasses and other personal protective equipment. Causes skin irritation and serious eye damage. In case of contact with skin and mucous membranes of the eyes, rinse with plenty of water and, if necessary, consult a doctor.
Disposal:
The container must be recycled or disposed of as household waste.
Storage and transportation:
Store in a dark, dry, cool place at temperatures from 0 ° C to +35 ° C in a tightly closed container, away from heating devices, separate from drugs and food, out of the reach of children. Transportation is carried out by any means of transport that guarantee the integrity of the original packaging in accordance with the rules for the carriage of goods.
Shelf life:
5 years in unopened packaging from the date of production (working solutions remain active for up to 30 days)